The Southwest portion of the United States is currently facing the worst drought it has seen in at least 400 years. When we hear the word drought immediately our minds might go to needing more rain, but precipitation trends in the Southwest portion of the country really haven’t changed all that much over the years. What has changed is our climate. As we see hotter temperatures remaining steady surface water continues to evaporate. Snow in the mountains evaporates too, which results in less water flowing to rivers and streams. Overall, climate change makes it especially difficult to escape drought. Because of consistently high temperatures and water evaporation, the Colorado River Basin is seeing its worst drought in recorded history. Lake Mead’s water levels have dropped significantly over the past 35 years. In the past year alone levels have plunged from 44% of its full capacity in 2020 to 39% in 2021. This makes mandatory water withdrawal restrictions likely for Arizona and Nevada.

The thought of our water resources dwindling rapidly is terrifying, no doubt. However, renewable energy sources like solar and wind can mitigate our drought issue and set us on a better path to conserving this precious resource that is vital to all life on earth. 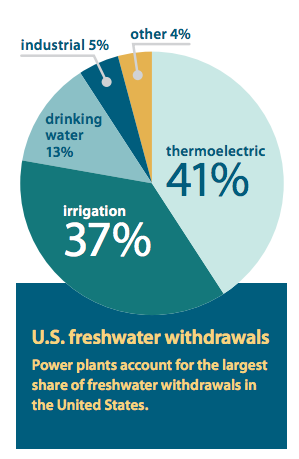 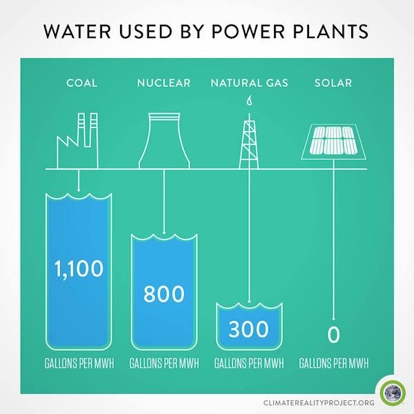 If the demand for energy from fossil fuels that use hundreds of billions of gallons of water in the US every day was dramatically reduced and replaced with clean energy such as solar power, then we could maintain our water supply at a sustainable rate by depending on resources that do not need water to produce energy. Less dependence on hydropower generation in a place like California, a national leader for agriculture, would mean that water can be saved for irrigation purposes, thereby securing food production as well.

Hydroelectric power plants extract from rivers and reservoirs that are continuously seeing lower water levels. California’s record-breaking drought between 2012 and 2016 dramatically reduced surface water flow that powers hundreds of hydropower stations. This resulted in natural gas becoming a substitute which led to more combustion of fossil fuels leading to a ten percent increase in CO2 emissions. Groundwater demand increased to make up for surface water loss. Though this helped to offset the impact of the drought, it also caused severe groundwater depletion.

Because of the drought, hydropower generation plunged to 7% of the state’s total power generated, whereas the average is typically around 18%. Solar and wind power were both rapidly growing in the state and helped to compensate for electricity generation. This was the first time that solar and wind power exceeded hydropower in California. The ever-declining cost of wind and solar energy as well as the state’s Renewables Portfolio Standard mandating a certain amount of renewables in energy production also gave it a boost.

A study out of Princeton University found that groundwater abstraction can be greatly reduced by reducing reliance on hydropower and increasing reliance on solar and wind energy. The point being that sustainable energy is essential to maintaining our water supply. When you add energy storage (batteries) into the mix, we can also reduce dependency on our aging grid, leading to fewer power outages and less devastation power outages often cause in the midst of extreme weather events also likely to become more frequent. This points to clean energy mitigating not only drought and air pollution, but the well-being of our communities when it comes to quality of life and survival in an ever-changing climate.

If you are considering joining the clean energy movement and making the switch to solar energy, contact us on our website or give us a call at 505.344.0071! Consultations are always free.