The 411 on Carbon Capture

The 411 on Carbon Capture

Since the Intergovernmental Panel on Climate Change’s latest report, we now know without a doubt that reducing the amount of greenhouse gas emissions in the atmosphere is going to be a must if we plan on limiting global warming to 1.5 degrees celsius and staving off catastrophic results of climate change.

A common term we hear these days is “net-zero”. The United States has a goal of reaching net-zero carbon emissions by 2050. What does that mean? Net-zero means that we must balance the greenhouse gases we produce with the amount that is removed from the earth’s atmosphere. Net-zero carbon emissions are achieved when the amount of CO2 added is no more than the amount taken away. It’s important to understand before we begin discussing carbon capture technologies, however, that mitigating the worst of climate change is not a this or that scenario. We cannot simply lower the emissions that we are sending into the atmosphere, we must also remove the ones already there. We also cannot limit our efforts to new technology, we must include the natural, organic resources that are already doing the job for us and protect those resources in every way possible.

Carbon Capture Technology comes in two popular forms. The first one is Carbon Capture and Storage (CCS). CCS means capturing the emissions from fossil fuel plants before they are emitted into the atmosphere and storing them underground. This sequesters the emissions currently being produced by thousands of fossil fuel plants around the world. Once captured, the CO2 can be dissolved in water and pumped underground into reactive basalt rock which then absorbs the carbon and locks it away permanently. 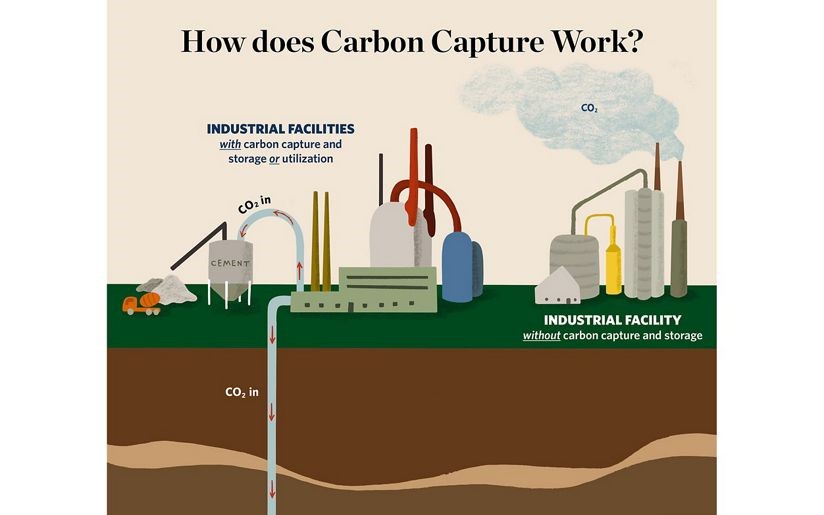 There is also the controversial Enhanced Oil Recovery (EOR). In this case, CO2 would be captured and then pumped underground with enormous amounts of pressure, injected into oil wells to bond with the oil, and help carry more of it to the surface. This is sometimes confused for fracking but it is not the same thing. Fracking opens new fissures in rock while EOR scrubs existing ones. When CO2 is used for EOR, 90-95% of it stays underground, an argument that many give for it being a good use of carbon capture technology. 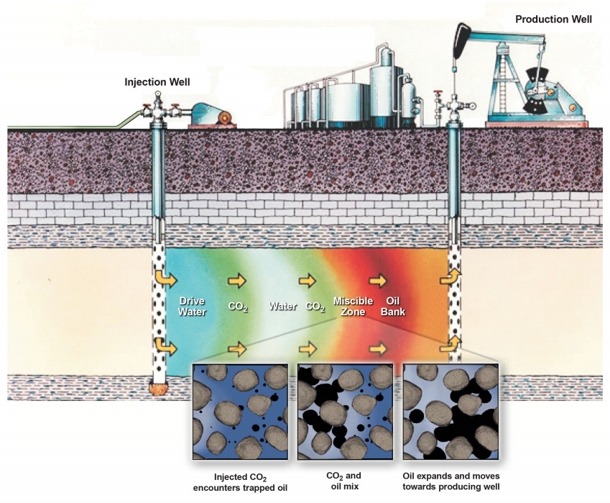 The world’s most active Enhanced Oil Recovery field is actually the Permian Basin, located in Southeastern New Mexico and West Texas. There are thousands of miles of pipeline and infrastructure in place just for this EOR region. Concerns regarding oil and gas pollution from residents who live in the surrounding areas were heard at COP26. The Permian Basin is a major topic of discussion in our state, and rightfully so as it experiences the highest methane emissions measured from any major U.S. oil and gas basin. Oil and gas activities in the Permian have historically released methane at twice the average rate discovered in studies of 11 other major oil and gas regions in the nation. Also of concern is the fact that three out of four children in our state’s largest oil and gas producing counties live within a mile of an active well site. Each of these counties has received failing grades from the American Lung Association when measuring healthy air quality.

Issues commonly brought up pertaining to carbon capture and storage is that it could encourage industries to continue releasing greenhouse gas emissions, business as usual, so long as they are also being sequestered.

You may have also heard of Carbon Dioxide Removal (CDR) being referred to as direct air capture, negative emissions, or carbon drawdown. CDR involves free-standing machines that suck air in through a filter, extracting CO2. The carbon is then stored underground or combined with hydrogen to produce synthetic fuels. While Carbon Capture and Storage captures emissions before they reach the atmosphere, direct air capture like CDR removes what is already in the atmosphere. 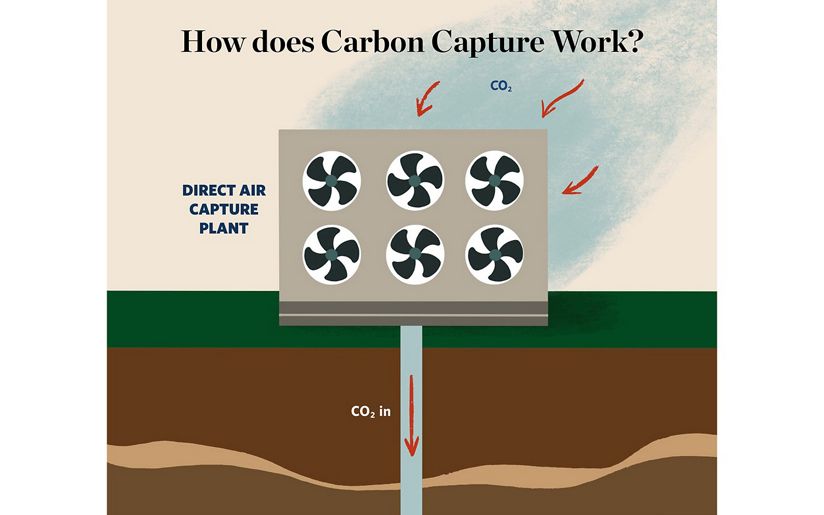 Mankind currently emits 40 gigatons of CO2 per year. We would need 10,000 carbon capture plants by the end of the century just to sequester 27 gigatons a year. While we have the technology, we do not have it to scale. A carbon tax, however, could provide the capital needed to develop more carbon capturing systems.

Natural carbon sequestration has been a process in place for billions and billions of years. 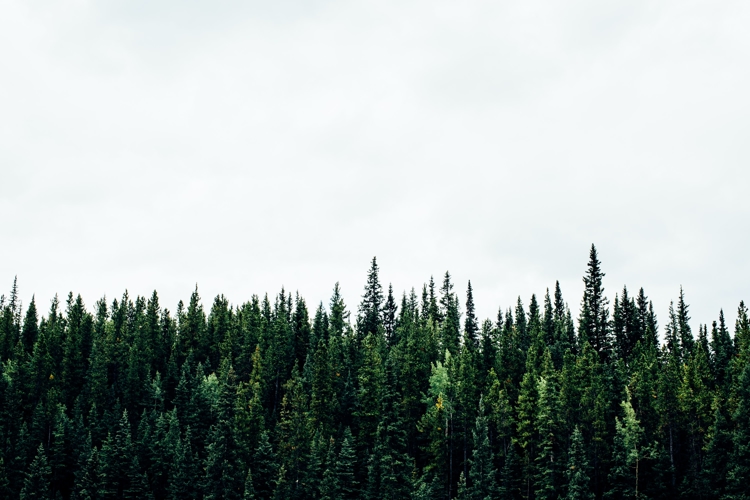 In the United States, we have 766 million acres of forestland that absorb 16% of our CO2 emissions annually. Protecting our natural environments and ending deforestation globally is imperative to securing these natural carbon capture methods. According to the Intergovernmental Panel on Climate Change, nature-based solutions, like forests, could reduce up to ⅓ of the emissions required by 2030 to meet the targets of the Paris Agreement. This is why afforestation, reforestation, ending deforestation, and improving forest management, are all essential to reducing greenhouse gas emissions and mitigating the worst of climate change. It is also vital to biodiversity which is continuously under threat as climate change worsens. 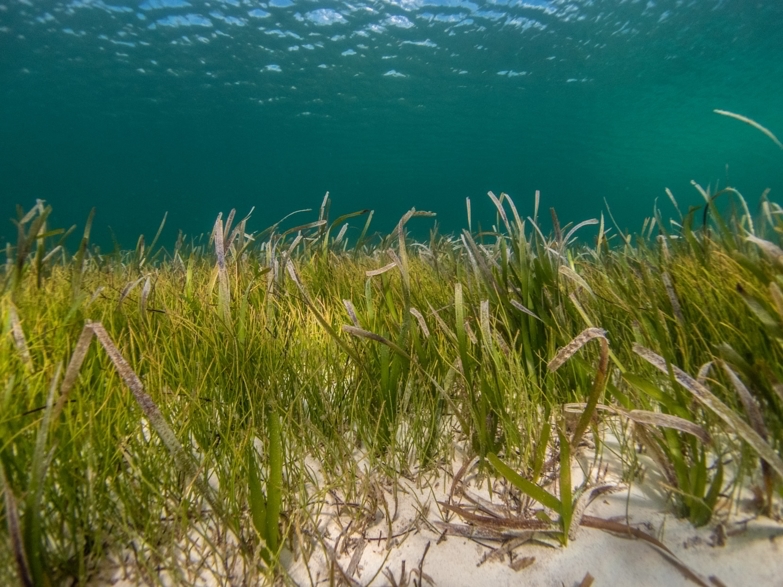 Seagrass is another carbon-capturing wonder as it sequesters carbon up to 35 times faster than rainforests. While it only covers .2% of the seafloor, seagrass absorbs 10% of the ocean’s carbon every year. Because seagrass is declining around the world due to rising ocean temperatures, pollution, and coastal development, massive restoration projects are taking shape. 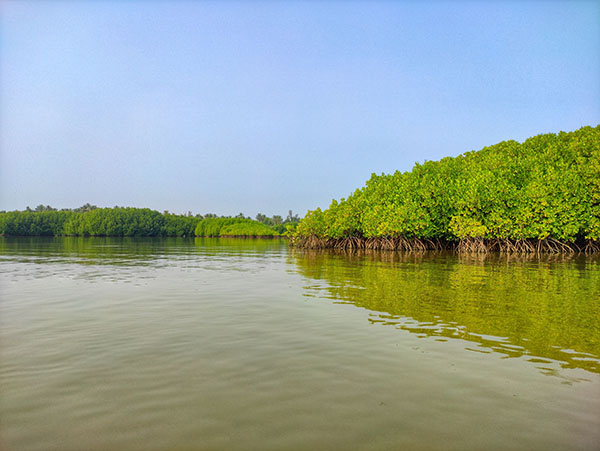 Coastal wetlands are known to sequester more carbon than any other coastal ecosystem. As coastal habitats, mangroves account for 14% of carbon sequestration. When disturbed, their emissions, as a result, can be incredibly high. Overall, mangroves sequester four times more carbon than rainforests.

In every corner of the world, we must be mindful of protecting our natural ecosystems and habitats because they are under tremendous threat by the climate change that we are actively working to mitigate. While we marvel at their wonder, they can only do their part if protected.

Forests all over the world are in the grip of the climate crisis. The Amazon rainforest is currently emitting more carbon dioxide than sequestering because of fires, deforestation, and drought. Mangroves are also being deforested for industries such as shrimp farming and agriculture. Pollution from fertilizers, pesticides, and other waste also threatens mangroves. In the past 50 years, the world has lost more than a quarter of mangrove forests. Restoration projects are also underway to protect these vital ecosystems.

Deploying clean energy at scale is one of the most important greenhouse gas emission mitigation strategies available today. Our greatest focus must be reducing our dependence on fossil fuels. By ending our overall reliance on fossil fuels, we have fewer greenhouse gas emissions to worry about capturing, storing, or absorbing from the atmosphere. By avoiding additional greenhouse gases wherever possible, we do our environment a favor and ourselves a favor by stopping the ultimate cause of climate change at the source - that is our source of energy. 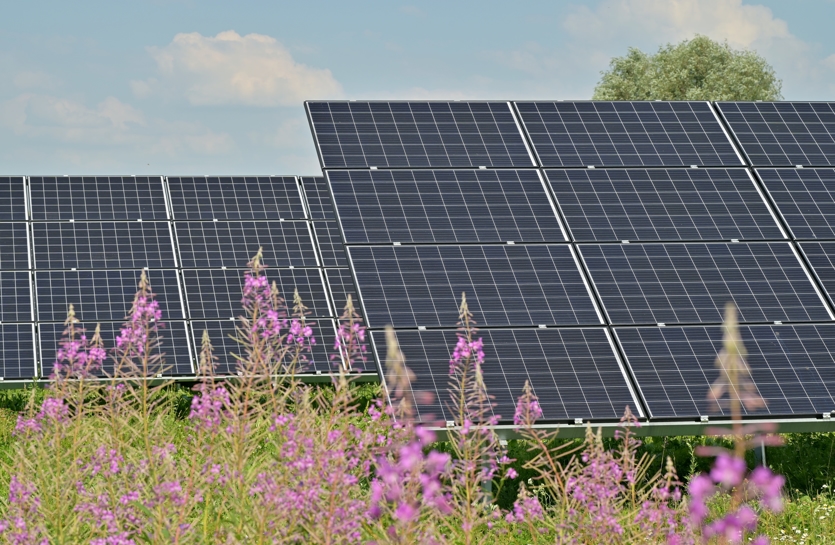 Whether it be innovative technology or a natural method that we’ve seen in action for billions of years, none of these carbon-capturing strategies should be viewed as mutually exclusive. We need all hands on deck to take every action necessary to reduce greenhouse gas emissions as much as possible. Collective action is the only way to reach our targets as well as collective protection around the world of our natural resources already doing the work for us. It is with this in mind that we can keep hope alive for a cleaner, healthier, future.

Contact Positive Energy Solar today to join the collective action against climate change, and learn what installing solar panels for your home or business can do to lower your greenhouse gas emissions.