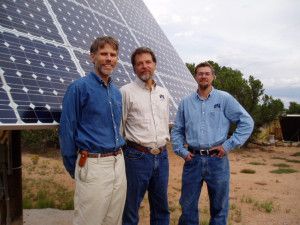 Founded on Solar – Company founder Allan Sindelar, a pioneer in the solar industry, founded Positive Energy Solar in 1997. Allan met Mark Drummond and Randy Sadewic while they were pursuing a Renewable Energy Certificate at San Juan College (one of the first and premiere solar training programs in the United States) and they became partners in the company in 2002. Fellow San Juan College alum Mark Westbrock became an employee-owner and opened the Las Cruces office in 2007 becoming the first solar company with a permanent office in the area. Over 16 years in business, Positive Energy Solar expanded to serve the entire state of New Mexico and now has offices in Albuquerque, Taos, Santa Fe and Las Cruces. The employee owners of Positive Energy Solar believe that providing region specific solar expertise, becoming part of the fabric of the community and creating local jobs are important reasons to have local offices rather than operate from a centralized office.

People at Positive Energy Solar are known as ‘solar geeks’. The staff boasts degrees in Business, Electrical Engineering, Physics, Biology, and Sustainable Development, among others. Positive Energy Solar employs more Certified Energy Practitioners (NABCEP) than any other solar company in New Mexico. Positive Energy solar geeks are thought leaders in the industry and are deeply engaged in trends in technology, financing, and policy. They teach courses and have trained hundreds of people about solar fundamentals, design, installation and financial benefits. You are invited to avail yourself of their expertise by asking any questions you might have, such as “What is the true cost of solar electricity over the lifespan of a system? Is it cheaper or more expensive than grid energy?” Beware; graphs will probably be part of the answer. That’s what you get from a solar geek. 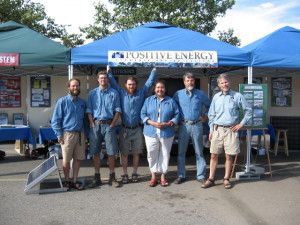 2007 shows the beginning of growth with new employee-owner, Mark Westbrock, along with the founders and new staff members.