Can Solar Panels Be Recycled?

Can Solar Panels Be Recycled?

Solar energy is the fastest growing and most affordable energy source available. Over 3 million solar energy systems have been installed throughout the country in the past two decades with a third of those installations taking place in the past two years alone. Currently, there is enough solar energy capacity in the U.S. to power 7.7 million homes. So what do we do with those panels after their lifespan runs out? The average lifespan of a solar system is between 25-30 years which means many of the earlier installed solar panels are reaching the end of their “useful lifespan” consideration and will likely need to be removed and replaced. The International Renewable Energy Agency (IRENA) predicts that by 2050 up to 78 million metric tons of solar panels will have reached their end of life and globally we will be generating approximately 6 million metric tons of new solar e-waste each year. But the good news is that solar panels can be recycled!

The materials used for solar panels are not the primary concern when it comes to recycling. Silicon-based solar panels comprise 95% of the solar market. These panels are primarily made of glass, plastic, and aluminum (similar to most consumer electronics). In fact, solar panels are essentially electronic sandwiches. The filling consists of a thin layer of photovoltaic cells made with silicon semiconductors. The interconnected PV cells are insulated and protected by plastic and glass. An aluminum frame holds everything together and on the back of the panel, a junction box holds copper wiring that channels the electricity generated.

The biggest challenge to recycling solar panels is taking them apart to access the recyclable materials. It is an extremely involved process and exposes workers to hazardous metals. Similarly to disassembling and recycling batteries, using automation and robots for these jobs is one way to keep workers safe.

Here’s what the process entails:

How Solar Panels Are Recycled 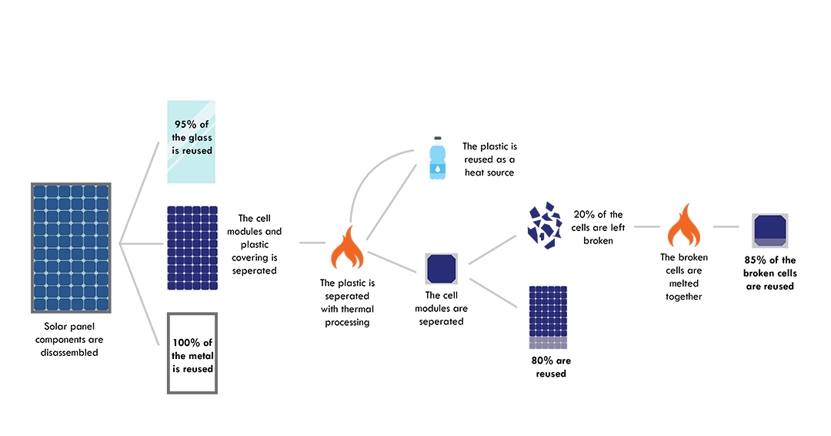 When solar panels end up in landfills, valuable resources go to waste. Environmental health hazards are a concern as materials like lead are toxic and leach out into the soil as they break down; Lead is used in many solar panels during the soldering process to connect cells together. Another piece of the puzzle is the expenses associated with recycling the panels. Currently, due to a lack of capacity in the industry, it costs between $20 and $30 to recycle just one panel. If that same panel were to end up in the landfill, it would cost between $1.00-2.00.

As it stands, the solar recycling industry in the U.S. is dismal. For this industry to grow and thrive, we need policies that will support it and even enforce it. In the European Union, by law, solar panel producers are required to ensure that panels are recycled properly. The same requirements are being put into place in Japan, India, and Australia. We do not have this level of accountability for recycling solar in the United States. The closest thing is in Washington DC where solar panel manufacturers are required to provide the public with a convenient and environmentally safe way to recycle all solar modules purchased after July of 2017. This necessitates manufacturers to finance the recycling of the system at no cost to the owner of the panels.

Through its Circular Business Models for the Solar Power Industry program, the European Commission is even funding demonstration projects that show how solar panels can be repurposed for charging stations and housing complexes. That’s right, reduce, reuse, and recycle applies to solar panels just as well! However, while sending second-hand solar panels to developing countries is a great way to reuse them, many of these countries do not have regulations on e-waste. Without accountability for recycling in place, we are sending our waste to other countries and potentially doing the same damage to the environment on someone else’s soil. The key to avoiding the floodgates of e-waste being opened truly lies within a robust recycling infrastructure. 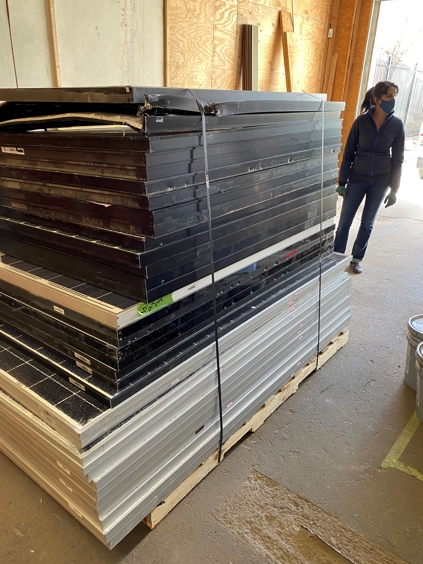 Positive Energy Solar is proud to work with WeRecycle, the largest recycler of solar panels in the U.S. for any modules that may break during their loading or unloading - a fairly rare occasion. Our systems installed over the past 24 years are still under warranty and have yet to reach their end-of-life cycles so we have not needed to send any retired panels their way yet. Typically, if a panel has a small scratch or a ding, we cannot install it on a project even though it is still fully functional. In these cases, we reduce our waste by offering the panel at a discounted rate to one of our solar-loving Positive Energy employees. We continue to monitor available solutions for our retired solar equipment and will plan accordingly with a focus on our company's values and triple bottom line of doing what is best for people, planet, and profit.

Besides the obvious environmental reasons behind increasing the capacity for recycling solar panels, there is an economic benefit as well. PV cells contain rare elements that are being depleted in our environment. Some of these include gallium, a soft metal commonly found in semiconductors, and indium also common in manufacturing. By recycling solar panels, we can recover and conserve these elements, continuing to use them for solar and other manufacturing. These elements become more profitable over time the rarer they get. IRENA predicts that approximately $15 billion in reusable materials could be recovered from recycling solar panel modules by 2050. 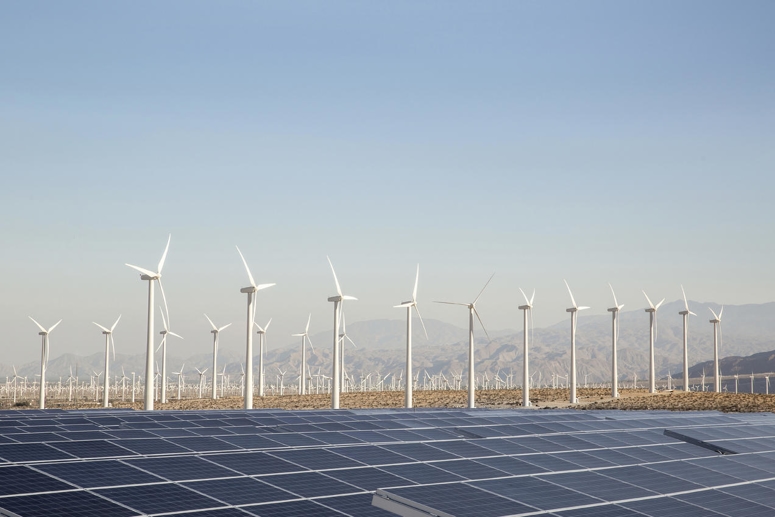 The issue of recycling renewable energy sources doesn’t stop with solar. Current predictions call for more than 720,000 tons worth of wind turbine blades also ending up in the landfill over the next two decades.

Only 5% of lithium-ion batteries, the batteries used in Electric Vehicles (EVs) are currently recycled. EV batteries see the same challenges in recycling that solar panels do: manually dismantling them in the recycling process to recover the recyclable materials is a feat. Batteries also pose more complex challenges due to their hazardous chemical components.

A clean energy transition is one of the most effective ways for us to combat the climate crisis. Dramatically reducing our reliance on fossil fuels is among the most important steps we can take for the sake of our environment and future generations. The good news is that we are taking steps in the right direction and by looking into environmental impacts and reclamation processes now, we have the ability to avoid the pitfalls of energy & consumer product industries of the past.

Stay tuned to learn how engineers are working on designing batteries to avoid a massive amount of e-waste that looms on the horizon.