Is There Such a Thing as Free Solar Panels From the Government?

Is There Such a Thing as Free Solar Panels From the Government?

You have likely seen ads promoting “free solar”, “No-cost solar program”, “Free solar from the government” or something similar. With so many ads out there touting this, you may have asked yourself whether the government is really giving solar panels to homeowners for free – the answer is no, but keep reading to learn the truth about government incentives for solar and how financing options may allow you to go solar for no upfront cost and save money.

Since when is zero-down financing considered free solar and/or no cost?

Free solar ads are as deceptive as they are pervasive. They often allude to special government programs or deadlines that don’t actually exist, all to bait potential customers to click into their forms so they can generate leads, capture your information, potentially sell it to other companies (as there are many companies that act as marketing and advertising firms for solar but do not represent a single company), and ultimately try to hard-sell you. When you provide these companies with your contact information, a salesperson may then contact you in an attempt to sell you on solar financing with “zero upfront costs”. While there are great financing options for solar that allow you to save on energy costs while putting no money down, it’s never a great idea to work with a company that starts the relationship off with misleading information. 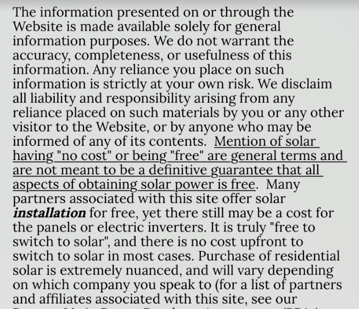 Some of the companies claiming to offer you free solar might be trying to get you to sign up for a solar lease or Power Purchase Agreement (PPA). When agreeing to a solar lease or (PPA)*, you do not own the solar equipment or receive any of the available government incentives for solar (more on this to come); you are renting the solar system from the solar company you worked with. With a lease, you pay a monthly “rent” to the solar company in return for use of the system which should theoretically lower your electric bill. With a PPA, you pay per kilowatt-hour (KWh) for power generated by the system, hence the name power purchase agreement. With either option, it is very common for the amount you pay each month to increase on an annual basis through the use of an escalator clause. But doesn’t an ever-increasing electric bill defeat one of the main financial benefits of solar energy? We think so.

It’s true that solar leases & PPA have no upfront cost (just like financing) but thisis not free solar, and the government doesn’t offer this program—solar companies do. It is an agreement renting your roof to a solar company in exchange for buying the energy their equipment produces-- with a lengthy 25-year contract, annual rate increases along with serious buy-out penalties, we might add.

*At Positive Energy Solar, we do not offer leasing or PPA options. We want our customers to benefit from the tax credits and financial incentives that come with owning a solar energy system, including fixed rates and energy independence.

There is also the fact that your property value will not increase under a solar lease or PPA because you do not own the solar. Under a PPA or lease agreement, it can be difficult to sell your home because the new owners must agree to take over the contract and qualify for the lease. The new buyer of your home would need to agree and qualify for the leasing program as a condition of sale, which can be off-putting for many potential home buyers. The alternative of paying out the remainder of the lease or agreement and having the solar system taken off of your roof can be costly—often more than the actual value of the system.

“Getting paid to go solar” is just a gimmicky promotion.

There’s another kind of misleading solar advertisement that claims you can “get paid to go solar”. So, what’s the deal—does the government really want homeowners to install solar panels so badly that they are willing to pay you to do so? Not at all. Any solar company offering to pay you to go solar is simply running a sales promotion and it’s not part of any government solar program. It’s ok if you want to get a proposal from them to compare, but pay attention to the fine print, factor in all of the costs and don’t let the upfront “discount” cloud your evaluation in selecting a reputable solar company in your area.

The Truth: $0 Down Options are Available… but it’s not “Free Solar”

At Positive Energy Solar, we work with local financiers like Nusenda Credit Union and Homewise for some of the best solar financing available. There are options for $0 down financing with various loan payment terms and conditions available that your helpful Solar Advisor will walk you through. Financing still allows you to keep any solar tax credits (state and federal) for which you may be eligible. When you finance solar energy through a solar loan, you get a locked in rate that never changes (unlike utility rates). For many of our customers, the monthly loan payment is the same or less than their previous utility bill - the difference is you’re paying off your solar energy system and powering your home with clean solar energy all the while.

The Truth: Solar is more attainable than ever—thanks in part to government incentives and economies of scale.

Over the last ten years, solar has become the cheapest form of energy in history. According to the Solar Energy Industry Association, in the past decade, residential solar energy systems have gone down in price by more than 60%.

State and federal tax incentives also make solar much more affordable. The solar investment tax credit, or federal solar tax credit, allows you to deduct up to 30% of the costs of your solar energy system from your federal taxes for systems installed between 2022 and 2032. Some states also provide additional solar incentives. For example, the New Mexico Solar Tax Credit provides a 10% tax credit with a savings value up to $6,000—it has an annual allotment of $12,000,000 and is allocated on a firstcome, first serve basis which is a good reason to act fast!

Trust matters when choosing a solar company to work with. You need to know that the installer will deal fairly with you, and that starts with truth in advertising. 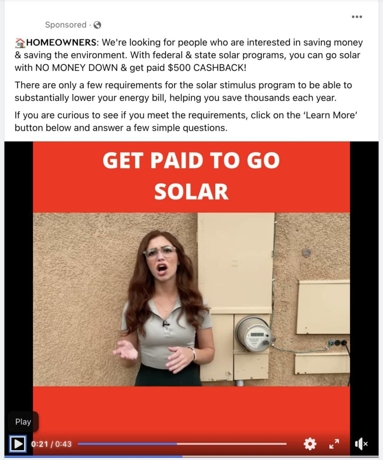 If you see a solar energy company making outrageous claims in their advertisements, the company might take a similarly dishonest approach to dealing with you in person. The decision to go solar is big, and you don’t want to let exaggerations and outright lies influence your choice.

We value transparency at Positive Energy Solar. It’s one of the reasons that we invest so much time in making sure anyone interested in solar energy is aware of the facts first. If you live in New Mexico and would like to consult one of our Solar Advisors about solar for your home or business, contact us! Our no-pressure consultations are always free.