Happy New Year to all of you.

My name is Evan Rohar; I am a residential solar installer working in Albuquerque for Positive Energy Solar.

I humbly request that you reject both PNM’s proposed power replacement plan for the San Juan Generating Station and the proposed rate case on economic, public health, and environmental grounds to make way for clean, renewable energies in the Land of Enchantment.

In its 2013 Commission Code of Conduct (Res. No. 01-03-13), the commission resolved to “treat the office of Commissioner as a public trust by using the powers of the office solely for the benefit of the public rather than for any personal benefit.”

Spending a combined $576 million on gas, coal, nuclear energy purchases and generating capacity does not serve the best interests of the public. Similarly, a dramatic rate increase falling disproportionately on residential customers has no benefit for the vast majority of New Mexicans; contrarily, it bodes well for PNM’s investors (who received an 8.1 percent dividend increase on December 9th).

Instead of draining dividends out of New Mexico, PNM should invest in its state. The company’s PR folks deem their plan as the “most cost-effective option for customers out of thousands analyzed for cost, risk and reliability.” PNM’s assessments, however, do not adequately account for human suffering caused by the coal plants and mines. According to the San Juan Citizens Alliance, SJGS contributes 33 premature deaths, 600 asthma attacks, 31 asthma-related emergency room visits, along with associated socialized health care costs exceeding $254 million every year.

Moreover, PNM’s economist only monetize fuel savings and neglect to consider the full benefits of solar into their calculations. Solar trumps all other energy investments in job-creation terms – a factor that should have a prominent role in decision making for a state that is continually ranked as one of the worst states for job growth. Solar generation saves money in distribution infrastructure, gives communities and businesses more energy autonomy, and decouples our economic destiny from volatile commodity markets. Furthermore, responsible solar energy development reduces our reliance on war-causing conflict resources like oil and natural gas.

Of course fossil fuels seem cheaper than solar without line items for traditionally labeled externalities, and PNM’s statistical acrobatics persist throughout its entire proposal. Hiding behind the guise of “fairness,” the company seeks to charge customers who have chosen solar simply for the privilege of grid access – which again leaves out key variables such as the peak fuel savings that accompany increased solar capacity. Until an agency studies the matter more thoroughly, PNM cannot determine a fair grid maintenance charge for solar customers. I ask that you to take a cautious approach in implementing fees that could stifle growth and disincentivize new installations.

In order to create a level playing field, economically speaking, policymakers must strive to make the shift to renewable energy just and minimally disruptive. They cannot, then, forget the coal workers, miners, transporters, plant workers, and all of those who make the coal industry hum. Industry and government need to take steps to replace coal jobs with clean energy jobs and ease the transition of coal and gas workers, who have a long and proud history laboring to fuel this nation, into the new energy sector.

Now, this may all seem self-serving. Admittedly, I entered the solar industry two years ago partially out of a desire for stable, gainful employment. My main consideration, however, was for the future of our children and the natural environments that surround and sustain us. Therefore, I’ll mention in closing an oft-overlooked feature of energy generation: water usage.

Thermoelectric power plants account for 41 percent of all freshwater withdrawals in the United States. As a recirculation-cooled power plant, SJGS consumes between 480 and 1,100 million gallons of water per year. With shrinking reservoirs and an increasingly insurmountable water debt to our southerly neighbors, we can ill afford in our high desert climate to evaporate so much water.

Any new expenditure on coal and other nonrenewable energies sloughs the burden of finding a solution to our water crisis squarely on future generations’ shoulders. To protect New Mexico’s air, land, and water for our children and grandchildren, I again implore the PRC to reject PNM’s proposed power replacement plan.

Thank you for your consideration in this important matter. 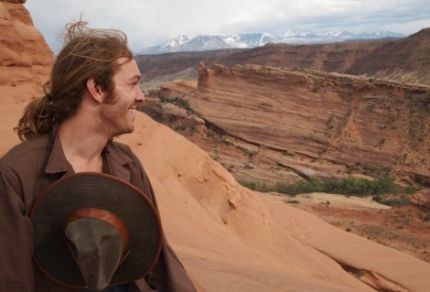 Evan Rohar
Hailing from Tacoma, Washington, Evan entered into the solar industry in 2013 through CNM’s Solar Center of Excellence. His background in history and political science led him to conclude that, with continually rising oil prices and increasing water scarcity, harvesting the sun’s energy was a smart career choice.
Evan previously worked in Detroit as a journalist; Ojai, CA as a musician; and Santa Fe as a solar thermal and radiant heating technician.
Outside of work, Evan is an amateur cook, musician, writer, and trapeze artist. He spendsmuch of his free time volunteering for various social justice causes and takes great pleasure teaching any subject to anyone willing to learn.