Earlier this March, at a Santa Fe Forward-sponsored conversation held at the Santa Fe University of Art and Design, Mayor Javier Gonzales held a conversation on how to alleviate climate change while creating jobs and fighting poverty here in the City Sustainable

Gonzales sat down with Robert Pollin, University of Massachusetts Amherst economics professor and author of Greening the Global Economy, and James Jimenez, former chief of staff for governor Bill Richardson and Director of Policy, Research & Advocacy Integration at New Mexico Voices for Children. It was a not-so-subtle way for Gonzales to solicit support for the Verde Fund, his measure that would establish an investment from which millions of dollars of new money could be employed to help combat both poverty and climate change, with advisement from the Mayor’s Children, Youth and Families Community Cabinet and the Santa Fe Sustainability Commission. It’s an idea Santa Fe Forward has been championing, and one the City Council is set to vote on. (Which explained the presence of councilor Chris Rivera, head of the Public Utilities Commission, and newly elected councilor Renee Villareal.)

For most everyone in the crowd of 125 or so in attendance—from Mariel Nanasi, executive director and president of New Energy Economy and Randy Grissom, president of the Santa Fe Community College, to incoming District 4 County Commissioner Anna Hamilton and Craig O’Hare, the County’s apostle of all things solar and head of its 2016 Solarize Santa Fe! campaign—taking some sort of action, and soon, was already a given. And after Pollin laid out a very convincing argument in support of the economic benefits of a green economy, and Jimenez explained how to make it happen politically, even the most fervent fossil-fueler would’ve had a hard time walking out of there not wanting to invest in renewable energy.

Not that it’ll be anything but easy.
To wit. 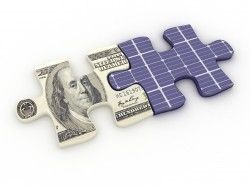 The average American, in a litany of stats thrown out by Pollin, emits 17 tons of CO2 per year. In Germany, it’s 9 tons. In Sweden, it’s 6 tons. And here in Santa Fe, where we seem to pride ourselves on our renewableness, we emit 25 tons. Yes. 25. If we want to become America’s Biggest Emissions Losers we’re gonna have to scale way way down. As Pollin said, “It’s very ambitious to want to do this, but it is achievable.”

And we can’t rely on federal or even state government to help get us there. Which is why Pollin and Jimenez showed up for this Green Prosperity talk. It’s local. Both Jimenez and Pollin seemed to be there not just in support of Gonzales and for the chance to espouse their belief that clean energy policies can fight poverty and raise living standards and promote that belief in the hopes that the City becomes the prototype for this (as we did for the living wage movement), they also seemed to believe that the more local and the more private this type of movement, the better its chances for success.

As Gonzales pointed out, “Climate change is an immediate threat to the community, and it’s widening the gap of income inequality.” And despite having made the commitment to becoming carbon-free by 2040. Guess what? That commitment has not been funded.
“There’s no way,” said Pollin, “to get to that 2040 goal by government spending alone.”

You need private investors with the encouragement of the city. “The city is critical,” stressed Pollin. “The main driver is local government driving private capital. And then it won’t matter who’s in power. This project can be a template for the entire country. Just like the living wage.

“By advancing 2040 and the Verde Fund,” he added, “you create more low-wage jobs in green economy. For every dollar spent in a green economy, you get three times more jobs than in a fossil-fuel economy.”

And when you switch from dirty energy to clean energy, you save money. Cost from wind is lower than coal. According to the Department of Energy, the cost is 8.3 cents per kilowatt hour, as compared to 9.2 for coal. “And even though solar is pricier now, it is coming down,” said Pollin. “And it’s going to get cheaper too.”

As nicely elucidated in the flyer that O’Hare passed out to everyone beforehand: Today, solar electric systems cost 60% less than they did just five years ago.

Which is partly why the Solarize Santa Fe! campaign is offering free advice to home and business owners throughout the county on how cost-effective solar energy has become. And there are financial incentives programs as well. Homewise, for instance, the nonprofit lending organization, offers 6% loans to Santa Fe Country residents (including inside the city), for up to 30 years, for homeowners who have a gross annual income of less than $104,000 per year.

As the talk wound down, Gonzales asked for specific recommendations on how to make this transformation. And how to sell it to the public and to the potential private investors. They both advocated retrofits and installation of solar panels—at the expense of . . . well, not the city. And not the consumer. And not any of the private investors. But through the savings that would come about as a result of switching over to solar energy and retrofits. All of which sounded convincing at the moment.

Even so, as outlined by numerous studies and Pollin himself, going green has actually proved to be profitable. The challenge, of course, will be in convincing people that it’s the best route toward economic and environmental sustainability.
As Jimenez pointed out to the councilors there at the meeting, and to councilors everywhere: “Don’t be afraid to innovate. And when you’re implementing these changes, make sure you’re capturing the data that tells your story.”