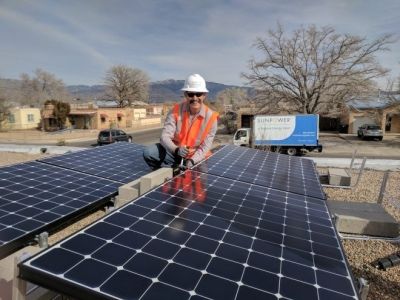 “Trump won’t stop it because it creates so many jobs in this country now,” said Regina Wheeler, CEO of Albuquerque-based Positive Energy Solar. “I think solar is here to stay regardless of what happens in D.C.,” Corio said. “We’re at a tipping point where the cost of solar is competitive with fossil fuels.”

Corio said when he started Array in New Mexico nearly 30 years ago, the cost of solar energy was $12 a peak watt. “Today, we’re installing energy around $1 a peak watt, a huge cost reduction. Today the power plants we’re building are cost-competitive and sometimes lower cost than fossil fuel generation.”

Regina Wheeler, CEO of Positive Energy Solar, which made $12.98 million in 2015 and ranked as the second highest-grossing solar and renewable energy company in New Mexico, agrees about solar holding its economic advantage over fossil fuels no matter what energy policy is in place.

“The train has left the station,” Wheeler said. “Our tiny New Mexico-based company can install a 5-megawatt system that produces 4-cent power. “The other thing is Trump won’t stop it because it creates so many jobs in this country now.”

The Solar Foundation, a Washington D.C. nonprofit advocacy group for the solar power industry, reported nationwide, the number of solar power industry jobs grew 25 percent from 2015 to 2016 to 260,000. Installation made up the largest number of jobs at 137,133, with the median wage for those jobs at $26 per hour.

According to that foundation’s 2016 Solar Job Census for New Mexico, the state had 2,929 solar jobs, with 54 percent job growth since 2015. About 40 percent of those jobs were in installation.

A story from American City Business Journals’ national news desk said that within the coal industry automation is picking off jobs. That story cited Bloomberg, which reported there were about 53,000 coal miners employed in the United States last year, compared to 126,000 in West Virginia alone about 70 years ago.

Public Service Co. of New Mexico spokesman Dan Ware said the Trump administration’s actions will not likely change the utility’s plans to close some of its coal-powered plant located in the northwestern part of the state.

“It will take time to see how the President’s actions may or may not impact our business going forward,” he said. “However, we don’t expect this will change our plans to retire two units at San Juan Generating Station by the end of this year or our efforts to continue to integrate cleaner energy into our system.”

On a national level, the U.S. Energy Information Administration reported that after falling in six out of seven quarters from mid-2014 to mid-2016, coal production rose in the third and fourth quarters of 2016. Among the coal supply regions, the EIA said the Powder River Basin in Montana and Wyoming saw the largest increases in the second half of 2016. The EIA attributed the increases in coal production to an increase in coal-fired electricity generation, which occurred as natural gas prices increased.

If you have questions about solar panel installation, we invite you to contact Positive Energy Solar today.