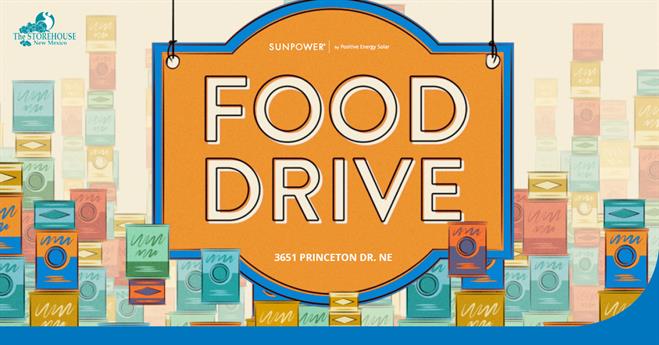 This year in New Mexico, more than 360,000 people, our neighbors, are at-risk of hunger. Let's make a positive change, together! Positive Energy Solar is proud to partner with The Storehouse New Mexico to help end hunger in New Mexico.

Bring your shelf stable food donations to our Albuquerque solar design center (3651 Princeton Dr. NE) now through December 16th and we'll donate an additional $1 for each item of food received.

The Storehouse became a non-profit organization in 1976 with one specific mission: to help New Mexicans solve their food insecurities regardless of race, faith, age, gender or disability. Hunger has increased rapidly over the years, and as of now, we have almost 50,000 customers.

Celebrated on the Tuesday following Thanksgiving (in the U.S.) and the widely recognized shopping events Black Friday and Cyber Monday, #GivingTuesday kicks off the charitable season, when many focus on their holiday and end-of-year giving. Since its inaugural year in 2012, #GivingTuesday has become a movement that celebrates and supports giving and philanthropy with events throughout the year and a growing catalog of resources.