What is Net Metering?

Put simply, net metering is a utility billing mechanism available in New Mexico that offers a credit to residential and business customers who are making excess electricity with their solar panel systems and sending it back to the grid. Think of it like "roll-over" minutes/data where you are able to use at a later time.

How Does Net Metering Work?

With all of the abundance of solar energy in New Mexico, a rooftop solar system can often generate more electricity than you consume during daylight hours.

With net metering, the homeowner is only billed for the “net” energy used each month, that is, the difference between the energy produced by the solar power system and the energy consumed by the house over the monthly billing period.

When your house or business is net-metered, you’ll see the meter run backwards, and that means your generating credits to hedge against the electricity you use from the grid when it’s not sunny or at nighttime. You are then billed only for your “net” energy use. The excess energy generated gets put back to the grid for your neighbors to use.

The Benefits of Net Metering

Net metering can save homeowners hundreds of dollars on their utility bills every year, so it’s a good reason to make the money-saving choice and go solar sooner rather than later.

There’s another benefit from net metering. Since your solar system is generating electricity near the point where it will be used, this reduces strain on the grid’s distribution and transmission infrastructure and minimizes energy loss from sending voltage many miles from the nearest power plant. While some claim that net metering represents an unfair burden on non-solar electricity customers, many net metering cost-benefit studies have found the opposite to be true.

To better illustrate how Net Metering impacts your utility bill with solar, let's look at an example. Using PV Watts, a typical 2.5 kW solar system will produce the following amount of AC Energy throughout the year in Albuquerque: 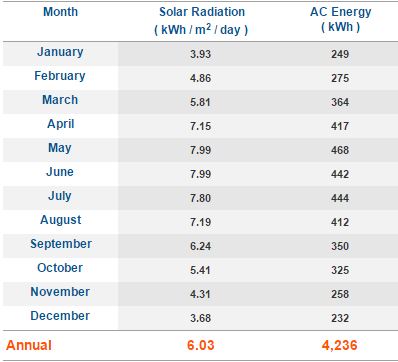 Under Net Metering principles, January and February show that the customer used slightly more power than they produced, resulting in a minimal bill. In March and April, they produced MORE power than they consumed, allowing them to bank this energy for May when they really needed it. Over time, they would continue to bank excess energy throughout the year, allowing it to be used on high usage months during the summer. As you can see, the total billing costs would amount to $41.84 for this duration.

Although New Mexico regulators and utilities have proposed policies that challenge net metering, there haven’t been many changes to the rules — yet.

Most utility companies and co-ops are regulated by some state entity. In New Mexico, the Public Regulation Commission determines the guidelines for what a power company can and can't do. PNM and the majority of utilities in New Mexico allow net metering for solar customers.

To learn more about net metering and other related policies in New Mexico, check out the Database of State Incentives for Renewables & Efficiency (DSIRE).

There are many discussions taking place across the country on how to evolve the current programs. Net metering updates may factor in such things as a more accurate valuation of the solar energy flowing into the distribution grid; rate structures that charge more for electricity at certain times of the day (or night) or look at where on the grid the excess electricity is being generated; credits at a wholesale rather than retail rate; and the impact of residential solar energy storage batteries.

If you are already benefiting from net metering for your solar system, you likely will be shielded from any significant reductions — you will be “grandfathered” in, regardless of any changes that may impact the rate design of new solar customers.